This month's Second Sunday Nature Walk was in Wilton at Kineowatha Park. About nine people managed to make it to the walk. It was a beautiful day. 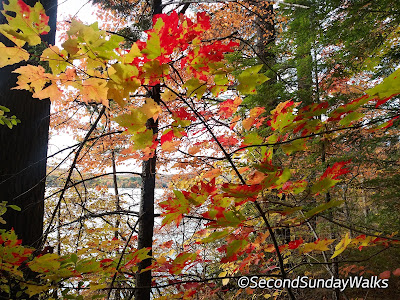 We walked a route through a large White Pine forest. The trails aren't especially well marked in the park, but there is a well maintained disc golf course that can be followed. On first entering the forest we looked at red maple leaves and discussed the difference between Red, Sugar, Norway, and Striped Maple leaves. Allen, a nature explorer who often joins us on our walks, found a fuzzy brownish caterpillar with longer black hairs on each end. The group looked to me for an identification, which wasn't coming to me immediately. After spending some time combing my references I've decided it was most likely a Dagger Moth, genus Acronicta, but I'm unsure whether it was A. dactylina (the Fingered Dagger Moth) or A. americana (the American Dagger Moth). I can always count on Allen to find interesting caterpillars. He's a good observer and super knowledgeable about trees. All of the explorers on the Second Sunday Walks are very observant and open to learning and sharing knowledge. 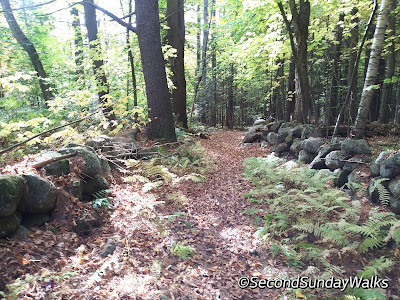 In the forest, we found that many of the ferns had been affected by frost and began turning bleach or brown. One exception was the Evergreen Wood Fern Dryopteris
intermedia. Most of the ferns in the image above are New York Ferns (Thelypteris noveboracensis) There are a few D. intermedia still dark green on the lower left. 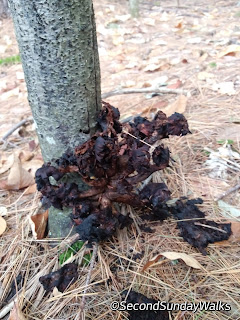 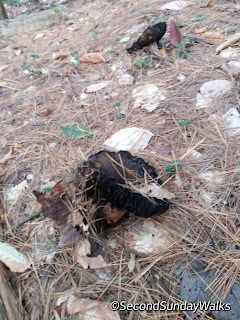 Likewise, many mushrooms had reached maturity and begun to decay. While I'm no expert on fungi, I'll only hazard a guess the these may be the remains of Honey Mushroom on the tree trunk, and possibly Broad Gill on the ground. There were still plenty of relatively fresh mushrooms to see too. especially when we explored an area with some decaying Paper Birch trees. Identification yet to be determined, if possible. 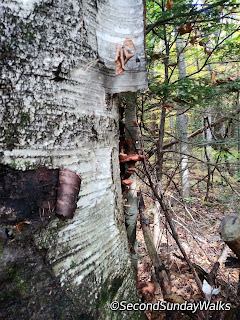 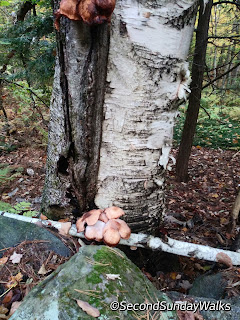 We walked on toward the shore of Wilson Lake, discovering more mushrooms along the way.

A few members of our group found a fairy ring. 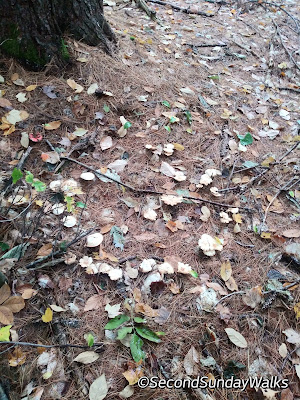 I regret that I didn't have the presence of mind to identify these mushrooms (or the red ones in the upper left of the ring. I did, however, mention that these are formed when the fungi in soil depletes nutrients the ring grows outward forming a progressively larger ring. Some of these fairy rings can be very large indeed, one in France is known to be over 2000 ft and over 700 years old. 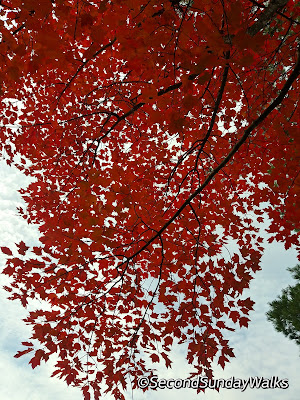 Once we reached the lakeside there was plenty to see as well. 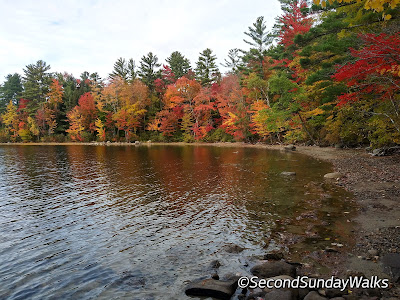 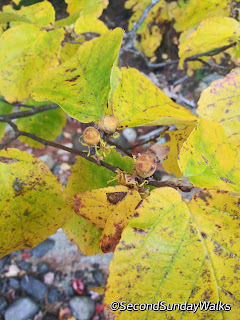 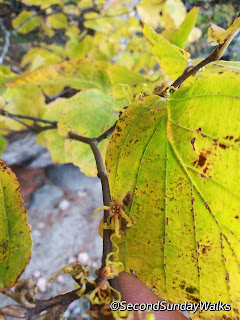 We had the opportunity to see Witch Hazel simultaneously ready to disperse this year's seeds and in full bloom with next year's fruit. These seeds are expelled 20 ft when they pop and the flowers are mostly pollinated by moths. 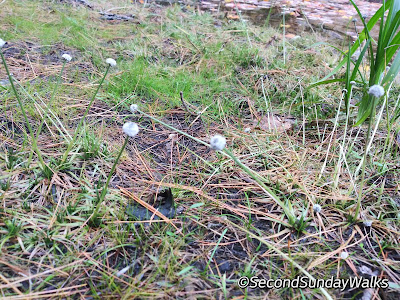 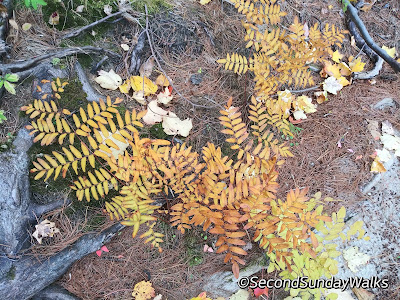 Along the lakeshore we saw Common Pipewort Eriocaulon aquaticum a small plant of lakeshores. We also took notice of the fact that even ferns can display fall colors. Here a Royal Fern Osmunda regalis shows off. 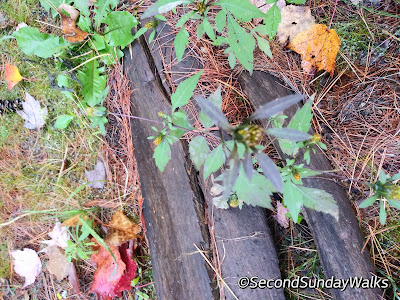 I was asked about this small flower with oddly shaped leaves, which I didn't know. It turns out that it is another plant that seems to favor lakeside settings called Devil's Beggarticks (Bidens frondosa) a nasty sounding name for a nice little plant. 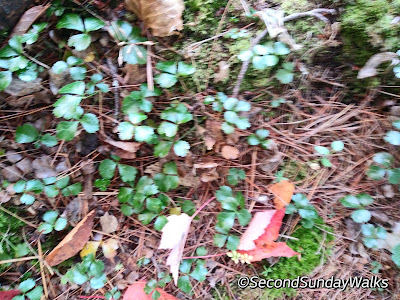 Throughout our walk we made note of the plants growing low to the ground in the forest understory. Pictured above is Goldthread Coptis trifolia a common medicinal herb used for intestinal issues. We also found lots of Partridgeberry Mitchella repens and Teaberry Gaultheria procumbens both used as herbal remedies in their own right. We took note of a couple of common lichens Common Greenshield Lichen (Flavoparmeila caperata) and Crumpled Rag Lichen (platismatia tuckermanii). We also found and briefly talked about sphagnum moss and the ways in which people can identify them. 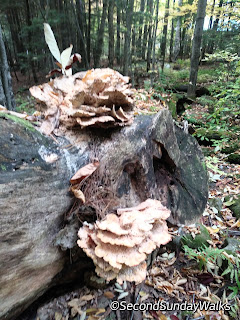 On our way out of the forest, I stopped to point out what I believe is a large colony of Chicken of The Woods or Sulphur Shelf (Laetiporus sulphueus) although its rotting now, I've seen this colony of mushrooms in my walks here in the past and believe it to be this mushroom.

Mushrooms on Top of Mushrooms

This blog post was written by both Lynda (text in blue) and myself (Anthony). If it works well, we may continue this format next year when we resume our walks.

This month our Second Sunday Nature Walk was held at the Jay Recreation Area Trail System. In the parking lot behind Spruce Mountain High School in Jay a collection of explorers began to assemble as 9:00 am approached. Lynda and I had explored the trails on the previous day and found them not only to be in fine condition but teeming with mushrooms and fall wildflowers as well. It seems that our preparation and pre-walk email piqued the mycological curiosity of a few.

As the group assembled I began to recognize the faces of folks who had been on some walks with us already, a few new faces, and some friends and associates. I was glad to see Lynda's friends Mike Ladd and Justin Beaudet, Mike is a member of the Maine Mycological Society and very knowledgeable about fungi. Fellow Maine Master Naturalist and all-around good guy Alan Seamans was lured in by my email to my surprise and delight. Alan is also super knowledgeable about fungi and able to share that information with enthusiasm and ease. Rounding out our group of mycology experts is Lynda. Long before discovering her newest passion for ferns, Lynda was deeply invested in learning all things mycological. Although she claims to be a bit rusty when it comes to fungi her ability to identify most common mushrooms far surpasses my own, which makes her an expert in my humble opinion.

Definitely today’s walk was especially exciting for the “shroomers” in the group!  There haven’t been many mushrooms around this summer, but today there were lots of mushrooms to look at.
It quickly became clear we were going to have some difficulty completing the entire walk in the two hour time frame we usually try to keep.  We stopped multiple times before reaching the trailhead. 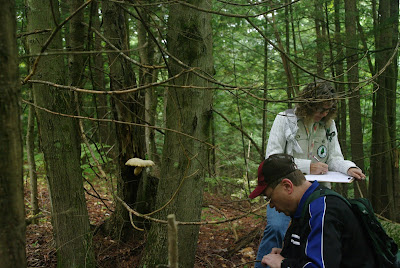 Once on the trail we continued to encounter fungi of all colors and shapes.


One exciting find today was an Earth Tongue, a Geoglossum species.  Earth tongues are easily reorganized by their usually black club like fruiting body (pictured left).  The trick is finding one because they are usually hidden in their surroundings and because of their dark color and small size.  Anthony spied this one.

Hemlock Varnish Shelf (Ganaderma tsugae) (left) set themselves apart with a dry, but shiny (varnished) upper surface.  This one is not so shiny because it’s rather old!

The pictures on the right and left are species of Coral Mushrooms.  The mushroom in the center is a Hydnellum species.  They have “teeth” rather then pores or blades

We also spent some time looking at a few of the marvelous lichens we encountered. Some folks on the walk were surprised to learn that lichens are a very special group of combined organisms in a mutualistic relationship comprised of a fungal component and algae or cyanobacteria as the photosynthetic component.

The medium where many of the fungi and lichens were growing was rich with an array of mosses and liverworts. This beautiful backdrop went largely unnoticed at the time. Luckily the images captured (mostly by Justin) show some of these as well. 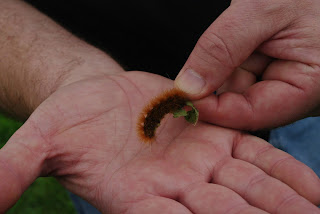 There were still plenty of entomological curiosities to keep the group interested. Here we found a Virgin Tiger Moth caterpillar and a few steps later we found a Sphinx Moth caterpillar (not pictured) and after remembering to look up on occasion, we found a large Bald-Faced Hornet nest. 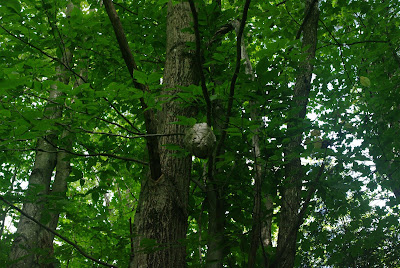 We eventually made our way to a meadow where the asters and goldenrods grew in abundance. Lynda made a quick reference sheet of some common asters we'd identified the day before and our group put them to use.

We saw bees and flies of all kinds visiting the aster and goldenrod flowers. We noted Queen Anne's Lace (not pictured) and Pearly Everlasting flowers as well.

On our way through the meadow we visited an area where American Chestnut tree seedlings had been planted. A young porcupine sitting along the edge of the plantation decided we were too close and waddled off into the brush. 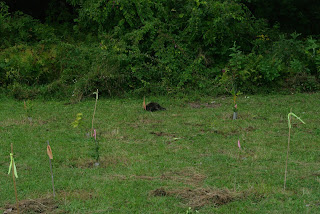 We stopped to see the wild grapes and a few of us tasted them once we were sure of their identity. They were sweet and tart.

Although It's a handsome flower, there was an abundance of Himalayan Jewelweed. An invasive species that spreads quickly due to its explosive seed distribution. In Maine we have a similar species, the Spotted Jewelweed which has a much smaller flower. It has the same slipper shape but is orange. 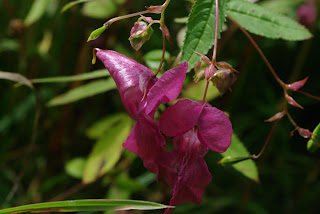 Justin, who is responsible for most of the great photos used for this blog entry, found these interesting specimens. These are actually plants that lack chlorophyll. They gain nutrients through an association with a soil fungus. The fungus is in an additional mycorrhizal relationship with a tree and the host tree roots and soil fungus provide nutrients for the plant.


On the final leg of our walk we discovered more mushrooms to enjoy. 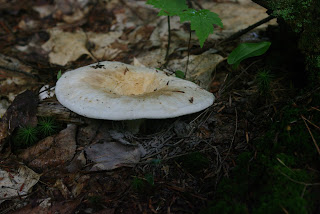 On the left is a Crested Coral (Clavulina cristata).  Center is a Jelly Fungus, probablyWitches Butter (Tremella mesenterica).  Witches Butter is a neat curiosity, but it doesn’t taste like much!  The mushroom on the right is a Bolete.  It has a surface under the cap is like a sponge.

Another hard to spot mushroom because of its size is the Golden Thread Cordyceps (Cordyceps ophisoglossoides).  We were lucky to fine one --thanks Allen!  It is a small thin mushroom that looks like a club or a misshapen tongue.  It is a fun find, but you have to be paying attention!  This mushroom attacks/parasitizes underground truffles (another type of mushroom).  Allan showed us how to follow the “golden thread” (root-like) that attaches it to the underground truffle. 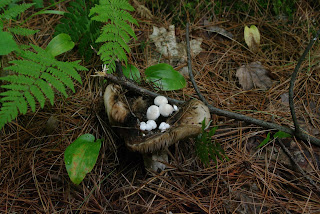 Perhaps the most interesting mushroom to the mycologically-minded explorers among our group was this apparently parasitic mushroom growing out of the top another one. Alan mentioned in a later email that this was likely Powder Cap (Asterophora lycoperdoides)  Sorry Anthony,  my favorite find was the Golden Thread Cordyceps).


It was a fun and interesting walk. I enjoyed learning more about the mushrooms in our forest. Those who have expertise in mycology were able to share their knowledge and those who are new to mushrooming bring fresh eyes and enthusiasm. Still others who are less interested in mushrooms were able to bring other observations to the group. Our two hour timeline for the walk was pushed to three and a half hours. Usually I like to stick to the timeline to avoid folks getting to saturation point with information. It seemed to me that everyone had a great time and there was plenty of things for all to see.

Posted by Second Sunday Nature Walks at 11:31 AM No comments: